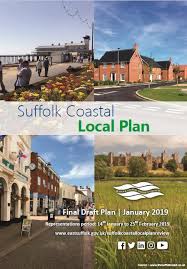 Following public consultation on the draft plan, the Independent Examination in 2020 found that the Suffolk Coastal Local Plan is legally compliant and sound, subject to the Main Modifications being made. East Suffolk Council adopted the modified Local Plan on 23rd September 2020.

The Local Plan is of particular significance to the parish because the Suffolk Constabulary site and the Woodbridge Town Football Club site are included within the Local Plan as potential sites for housing development - as new policies SCLP 12.25 and 12.33 respectively - contrary to the Martlesham Neighbourhood Plan.

The inclusion of both sites was accepted by the Planning Inspector subject to Main Modifications being made. Specific modifications to the draft policies are listed at pages 134-135 of the Appendix - Main Modifications for the Police site and pages 145 - 146 for the Woodbridge Town Football site.  In summary: For the Police site, the Inspector sought modifications to ensure a mix of housing which contributes to high quality design, to provide for housing for older people and to conserve heritage assets in an appropriate manner. For the sports provision, the Inspector wished to see that the policy accords with relevant national policy.  As the plans indicate the Police Investigation Centre is to be retained, fear of crime should not undermine the quality of life for future and existing residents.  For the Woodbridge Town Football site, the Inspector advised any sports provision to be replaced must be replaced by an equivalent or better provision in terms of quality and quantity in a suitable location.

The consultation on the Main Modifications to the Suffolk Coastal Local Plan closed 10th July 2020.  We submitted our 2020 Consultation Response for consideration. View our Specific comments and General comments

In April 2020 Suffolk Constabulary submitted its outline plans for 300 houses, with all matters reserved except for access. We objected to the application for outline planning permission for a variety of reasons including that the Constabulary Application relied on draft Suffolk Local Plan policies which were not planning law at that time. View our MPC response to the Police planning application.

In addition, we attended the Planning Inspectorate Examination Hearings in 2019 to represent the Parish to the independent Inspector. See further Matter 1 and Matter 3. We drew the Inspector's attention to the late inclusion of the Police HQ and Woodbridge Town Football Club sites nominated for housing, and the fact that the related policies failed to take in to account the Martlesham Neighbourhood Plan. We drew attention to our earlier 2018 responses and statements to the 2018 version of the draft Local Plan which covered many issues with the proposed planning policy.  MPC representations

Between 20 July and 14 Sept 2018 Suffolk Coastal District Council (SCDC) as it was then (East Suffolk Council as it is now) carried out a public consultation on their draft Local Plan. This draft plan was the culmination of several years’ work by the SCDC planning department. The draft Local Plan aligned closely with the Martlesham Neighbourhood Plan at this time – i.e. it said that there would only be 20 additional dwellings required in this area up to 2036, as 2000 homes were already approved for the Brightwell Lakes site next to BT. As a result your Parish Council was generally satisfied with the first draft Local Plan and responded accordingly. However, towards the end of November 2018 we were then informed these two major new sites within the Parish had been added to the draft Plan. Furthermore, policies for these two sites had already been drawn up - we were told that these could not be changed in substance.

Suffolk Constabulary HQ Site -   (this is within the Neighbourhood Plan area)

IN APRIL 2020 THE SUFFOLK CONSTABULARY SUBMITTED AN OUTLINE PLANNING APPLICATION FOR 300 HOMES INCLUDING 170 FLATS  BEFORE THE PLANNING INSPECTOR  PUBLISHED HIS FINDINGS ON THE PROPOSED LOCAL PLAN. ( draft Local Plan Policy SCLP 12.25 ) The Police planning application is available online at East Suffolk Council: View documents and our response MPC response.

Most of you will already be aware that the police announced in mid-2018 (just a matter of a week or two before the Neighbourhood Plan had been formally adopted) their intention to look at the possibility of selling off their site and using the income to move to a new location in more modern buildings which they said would be much cheaper to run. The designs they published at the time were for 250 homes on the site.

We subsequently met the Police & Crime Commissioner, Tim Passmore, and his consultants on two occasions and we discussed far ranging options for the site including the need for more sports facilities in this area to meet shortages in Martlesham and Kesgrave, the need for downsizing housing (bungalows) for older residents, the need for e.g. a nursing home etc. The Brightwell Lakes plans that we have seen do not mention any facilities for the elderly.

Unknown to us, the police submitted a response to the SCDC consultation on 13 September 2018 (one day before the closing date) formally requesting that their site be included in the Local Plan. We have since then consistently objected to East Suffolk Council including the sites in the Local Plan.

SCLP Policy 12.25. It is emphasised that the Parish Council was not consulted at all about the wording of this new draft Local Plan Policy SCLP12:25 (let alone the general principle of changing its use from employment to housing) or how it was interpreted within the context of the Neighbourhood Plan.

The idea of developing this site has been mooted for quite a few years, but nonetheless it was not included in the draft Local Plan first put out to public consultation.

Unknown to us an agent for Hopkins Homes submitted a response to the 2018 consultation on the closing day which concluded “A policy should be added to the Plan to define Land at and surrounding Woodbridge Town Football Club as a strategic housing allocation for at least 100 dwellings.”

This site was then included in the  next version of the draft Local Plan with a new policy (SCLP12.33). SCDC  upped the figure to approx. 120 homes.

SCLP Policy 12.33 It is emphasised that the Parish Council was not consulted at all about the inclusion or wording of this new draft policy 12:33 let alone the principle of locating housing at this site.

The District Council proposals have been accepted by the Planning Inspector subject to Main Modifications being made. See further pages 145 and 146 of the Appendix- Main Modifications as they specifically relate to the Woodbridge Town Football Club site.